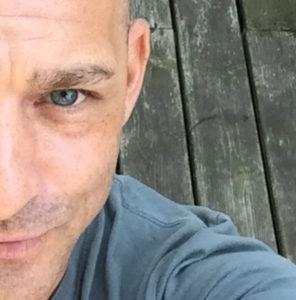 “That’s how much influence you can have over a platform with a different type of medium. For a couple of years, I was a voyeur on the Commons. In that time, I noticed there really wasn’t a platform for all kinds of experimental digital art and media art where you can create a platform for pedagogy that is open source but also includes integrating your courses, allowing students to create projects, and showcase it as a platform for collaboration.”

-Ryan Seslow, on the creation of Net-Art on the CUNY Academic Commons

Today I’m going to be sharing some compelling knowledge and experience gained from an interview I had with Ryan Seslow! Ryan is an Adjunct Associate Professor of Art & Design at both York College & the Borough of Manhattan Community College (as well as LIU Post and Iona College) and has been teaching for CUNY for 15 years! He teaches various hybrid studio art, digital art, graphic design, new media, digital storytelling, communication technology & web design courses for graduate and undergraduate level programs simultaneously throughout New York City!

Ryan has been a member of the CUNY Academic Commons since around 2011, where he spent several years simply watching as the network got its footing and slowly expanded. After a few years, he realized that there was an immense amount of potential for this platform to be utilized as an interactive medium from a more artistic approach. Ryan eventually created the CUNY Commons site Net-Art (short for Internet-Art), which embodies teaching a  mixture of foundation graphic design, foundation animation, and new media courses.

However, Net-Art is not a course for himself to use exclusively with his students, but an open course for anybody and everybody to use as a template. If you are an instructor teaching across any of the previously listed criteria, Net-Art features a gallery of student examples (with feedback), sample projects, reactive writing assignments, and a suggested syllabus!

Although at first glance some people may assume that operating a course through the philosophy Net-Art is intimidating, Ryan sets the tone for the course with wise words of community. He tells his students on the first day that before thinking anything about the course or the course content, that the experience they are going to have with these twenty other people in this physical space, at that physical time, will never happen again. Throughout the course of their lives, this will never happen like this again. According to Ryan, that in itself is a metaphor and it needs to be addressed at the start of the class because it is humanizing the class and what we have in common as people first. It shouldn’t be undervalued, it should be first and foremost. You should get to know each other and share a snippet of your story, and it will help to think in a more communal way. This altogether eloquently displays the heart of the CUNY Academic Commons, fostering an open, interconnected learning community.

Ryan continuously uploads blog posts to Net-Art “Reactive Writing Assignments” tab, and they essentially act as individual guides to using various digital-art software/apps such as Glitché and ImgPlay! He has also provided us with an excellent guide and example of using the CUNY Academic Commons as a platform to feature your person portfolio! Ryan created a CUNY Commons version of his own art portfolio in which he adds suggestions and various plug-ins that you can use to showcase your own work!

The following are just a couple of the many inspiring quotes from Ryan during our conversation:

What inspired you to create Net-Art on the CUNY Academic Commons?

“I’m a huge fan of the internet in general. It’s the greatest tool that has become such a significant partner in my life and there is so much value in sharing our growth transparently in a place of learning. When we talk about art, we default to renaissance masters such as Michaelangelo, and it is such a bad way of introducing people to creativity because you’re pitting them against these masters and they automatically begin to compete with that, totally bypassing what creativity and imagination really are. These are just tools for your growth and have nothing to do with drawing and painting. These are just a few of millions of creative outlets that you can intertwine into your life. So I think I’d like to be an example of what is possible on this interface. This page in our web browsers is a blank canvas, a white page.”

Do you have any advice for instructors who want to teach on the Commons for the first time?

“100%, jump in. Seriously, just jump in and reach out to other people using the Commons, and ask them questions! Ask them to meet up, chat, show some examples. Don’t not get started, just get started and taste it! See what happens. See what works, what doesn’t work, don’t overthink it, don’t worry that you’re doing it wrong, don’t worry that it’s not going to be as good as the last person’s post. Everyone is so worried about doing it the ‘right way,’ but the fact of the matter is, there is no right way. I’m excited when someone new comes on because they’re going to show me something new and I hope they reach out to me so that I can see it and follow along. I love the beauty of the randomness of it. Just poke around, see the people, see the various groups, and people will reach out. You just have to get your feet wet.”

Scholars and creators like Ryan, as well as all of you, are the lifeblood of the CUNY Academic Commons! I have a few more CUNY commoners lined up to share their own Commons experience, but if you are doing something exciting or experimental on our platform, do not hesitate to reach out! Until next time!

1 thought on “Digital Art & Pedagogy: The Creation of Net-Art”